Admission was free for the approximately 175 invited guests who attended this exclusive event.

Rye Yacht Club® is a social organization for the entire Long Island Sound community for people who love boating. It is open to new members from other local yacht clubs where reciprocal privileges are offered. Membership is free.

Learn step by step procedures performed in Palm Beach, FL and Mamaroneck, NY on this classic motor yacht that is currently for sale.

The 50′ Viking Princess is a luxurious high-performance mid-sized English motor yacht. It is a very popular and classic model with a long production run from 2001-2010.

There are ten pages of refit details below if you are seriously interested in purchasing a Viking Princess. There is no other boat like it. Over $550,000 was spent on refit during 2015-2019. New work is ongoing. JAWS II is a 2002 50′ Viking Princess flybridge motor yacht. This model is also called a Viking Sport Cruiser. The newer models are called Princess Yachts. However these terms all describe the same boat brand. Refit is a boating term used to describe repairs or renovation.

This classic Viking Yacht is for sale

Detailed photos of the twin turbocharged Volvo Penta 675 hp D-12’s refit (2016-2017) are provided towards the bottom of this page. Please scroll down if this particularly interests you. The list price of a comparable 2019 Viking Princess is $1,800,000.

There are a total of six coolers that should be removed and serviced as part of the recommended 1,000 hour engine service. These six coolers include two for each engine plus one for each transmission. However this is rarely performed because it can triple the cost of the 1,000 hour engine service. That’s why many diesel boats are for sale in the 700 – 900 hour range. The comprehensive 1,000 service for this boat cost $30,000. You will see why it is necessary below.

The coolers have been dropped off for cleaning and all parts have arrived. We found a broken flange on a discharge pipe that needs replacing and there are two bolts in the heat exchanger that were seized due to a salt water leak. That housing has been sent out to our machine shop for extraction and thread repair.

We will go ahead as planned with replacing the thermostat on the port engine. Next we will address the ignitions, belts and valve adjustments. Then we will replace the generator belt.

Lastly we will reinstall the coolers and housing after they return from our vendors and replace the thermostat on the starboard engine. The temperature sensors were replaced on both engines when the coolers were reinstalled.

The EDC was also replaced at the lower helm as were all the engine gauges at the upper helm. 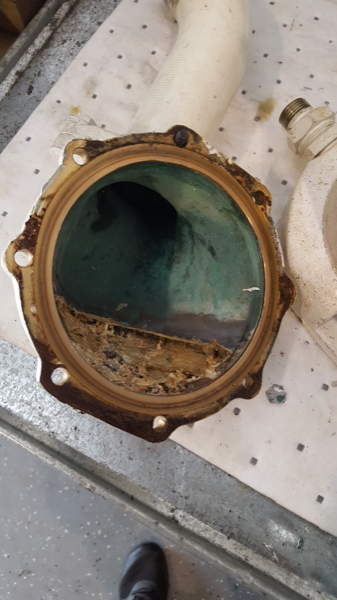 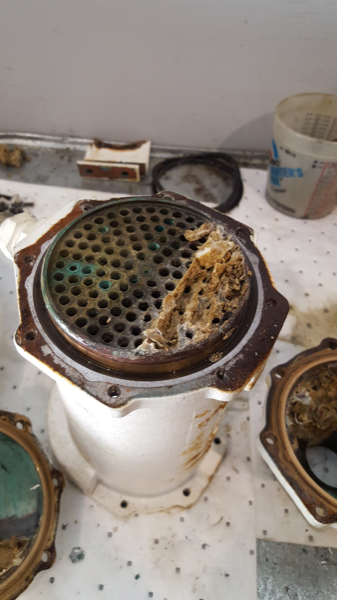 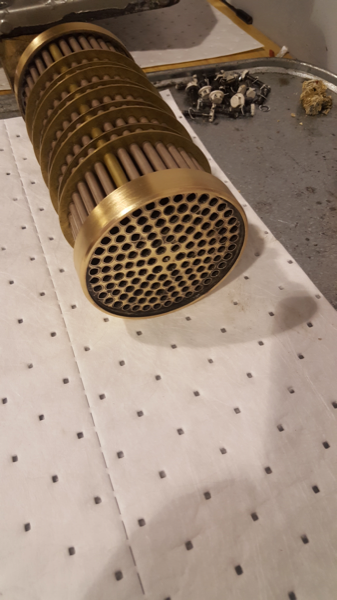 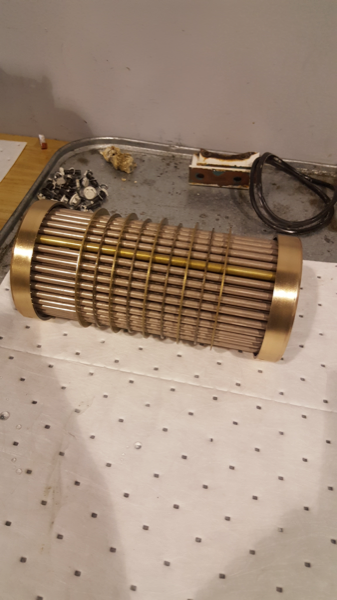 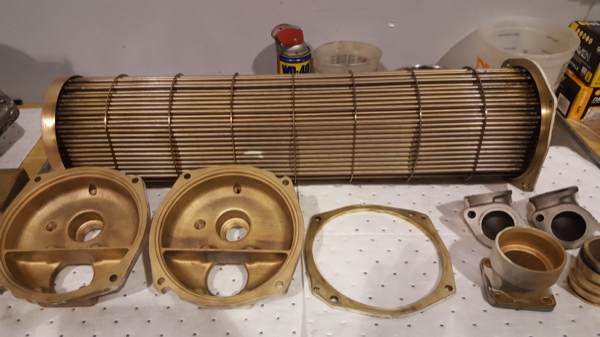